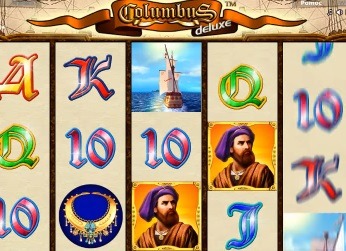 Bewertungen lesen
Bewertung schreiben
Be the first to comment!

Are you an explorer? Slots with Columbus theme are extremely popular among casino players all over the world. This one is most likely the best Columbus game of them all. At Columbus Deluxe – a slot provided to you by Novomatic – you are the explorer of the seven seas! So set sail and discover a world of winnings! Keep your ship on course on 5 reels with up to 10 win lines and take big winnings on board! By the way, it is about for an interesting fact before you continue reading this slot review. Christopher Columbus and his guys were actually the ones who brought gambling to U.S. We bet you didn't know about that!

3 Scatter symbols (ship) anywhere take 10 Columbus Deluxe free games on board - you play with the same settings than in your last regular game. In free games all ships represent all other symbols and can complete winning combinations. If 3 ships are sighted again during the free game you can collect 10 free games! When you play Columbus Deluxe, you feel just like Columbus was searching for riches with his ship on his voyage in 15th Century! Let the Ship Hunt begin!

If you like the Columbus Deluxe Slot machine, you might want to try another slot from Novomatic that is similar to Columbus - Captain Venture.

Lord of the Ocean
Novomatic