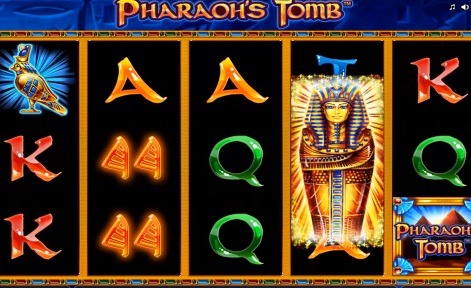 Welcome to the Ancient Egypt – a world full of secrets and large wins. Dive down to the golden treasures of the ancient Pyramids! That’s the motto of Pharaoh's Tomb – a slot machine game by Novomatic (Greentube).

You are en route to a winning combination with the Golden Sarcophagus - it complements the symbols and grants you unexpected winning opportunities in the feature game!

Did you know that gambling was popular in Ancient Egypt? If Ra and Cleopatra would come alive, they would for sure test their luck Pharaoh's Tomb as they would go for landbased Egypt-themed slots rather than the online ones and Novomatic slots are enormously popular "offline".

The lettering Pharaoh's Tomb is your key to the feature game: 3 or more Scatter symbol anywhere on the reels in the slot trigger 12 Pharaoh's Tomb free games where the bet of your last game round will be carried over.

One to three Wild symbols (Jokers) or three or more Scatter symbols win additional free rounds. If you like the theme of Pharaoh's Tomb, you can also try out a free game from Miniclip that is by no means related to Novomatic slot, but is still quite fun to play.

Lord of the Ocean
Novomatic